You are here: Home / A Date Night with Tina Fey and Amy Poehler! 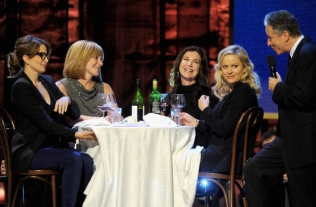 Well, it seems like I can cross another item off of my F**ket List…a date night with Tina Fey and Amy Poehler!

And what an amazing night it was—at an event for a cause that is very near and dear to my heart.  Night of Too Many Stars: America Comes Together for Autism Programs is a benefit to aid autism education.  The event was held at the Beacon Theatre in NYC.  Hosted by Jon Stewart, the evening featured Ben Stiller, Seth Rogen, Stephen Colbert, Harvey Keitel, Carly Rae Jepsen, Katy Perry, Sting, and many more…including, of course, Tina Fey and Amy Poehler.

So here’s what happened.  Jon Stewart announced that that one of the live auction items was to “spend a date night as the new best friend of Tina Fey and Amy Poehler.” The next thing I knew, the bidding began and I raised my hand high in the air.  Cut to…minutes later, I found myself onstage at the Beacon Theater—with my new best friends!  After an intimate bonding experience in front of approximately 3,000 audience members, we were whisked outside for a photo shoot that was later shown on a jumbo screen at the theater.  It was so exciting!  During our date night, we talked, we hugged, we kissed (and I got to kiss Jon Stewart!), ate tacos, got married…well, you can see for yourself.